On a picture-perfect winter day, I sit in silence in my cellar and look over the vast collection of wine that I’ve acquired over the years. I’ve been seriously researching, drinking and putting away wines for nearly 20 years.

I appreciate the love and applaud the grape inspired youth. Those few who jump into the world of wine in their early twenties, looking for knowledge, and not so much a way to get drunk. Also to those who grow up knowing they wanted to be a sommelier and those who just love wine for the art of winemaking. Especially to those who grew up nowhere near wineries but long to go to UC Davis and learn about Viticulture and finally those who grew up and around vineyards and carry on the family business.

My family was in real estate and construction and I chose not to follow in their footsteps. Instead, I went to work at a famous family owned, a fine wine store in Naples, California before I was even old enough to drink. That job continued through college and when I set out into the world years later, I took with me an insightful knowledge and passion for wine, which would eventually make its way into my writing about my love for it.

In the 1950’s and 60’s, a successful construction worker (contractor) had a fascination with all things wine. From researching to collecting to learning the nuances of what wine was. He became an oenophile. In 1973, he did something really pronounced when he purchased a 600-acre cattle ranch near St. Helena. He began at once planting vines and just one year later his new endeavor would be known as the Joseph Phelps Vineyards and continues to be to this day.

For 40 years Joseph Phelps has produced many award-winning wines from varieties such as Cabernet Sauvignon, Sauvignon Blanc, Viognier, and Cabernet Sauvignon Backus Vineyard. They also produce Eisrébe; a dessert wine made from the Scheurebe grape which must be tried. The sweet nectar-rich wine is one of my favorite ice wines and I can still taste how brilliantly it paired with a sharp cheese plate over three years ago.

Before one has dessert, the main course comes first (usually) and with that, the robust Cabernet Sauvignon from the Backus Vineyard is a wine to seek out. Aged for 25 months in new French oak barrels, this wine was first bottled in 1995 and it can age for 15 to 20 years. A superior California Cabernet.

After Phelps purchased the land, he hired Walter Schug to help with the winemaking operation. Together, they built the winery and grew grapes that California had never bottled before. In 1974, the Joseph Phelps Syrah was the first of its kind in the United States. That same year the winery would bottle what is still today considered a world-renowned signature wine; a wine that is on my ‘Top-10 List’ of all time personal favorites. That wine is Insignia. 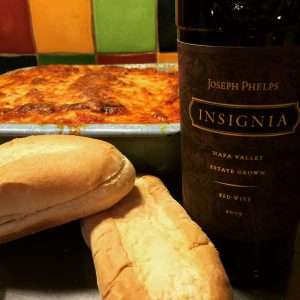 In the early 1970’s Walter Schug was considered one of the best winemakers in Napa Valley and would work with Phelps for the next 10 years. In 1979, one of the Phelps vineyard that grew pinot noir grapes stopped production. Walter Schug, with Phelps permission, starting bottling his own wine from the vines that Phelps no longer used and produced under his own wine label; Schug Winery. In 1989, Walter Schug purchased 50 acres in the Carneros Appellation southwest of Sonoma and today makes pinot noir, cabernet sauvignon, chardonnay, all at a reasonable price point. Joseph Phelps died in April 2015 at age 87 and Walter Schug, just six months after that, in October of 2015. He was 80 years old. The winery is carried on today by the Schug family.

Phelps and Schug, two remarkable men, were unquestionably pioneers and the wines they produced forty years ago and still to this day, are the kinds of wines that leave a mark and only get better. The now-famous Insignia was a masterpiece in winemaking. In 1974, when the first bottle was released, a legacy was born.

“The proprietary name Insignia was selected to represent the finest lots available from each vintage, and to emphasize the importance of blending over varietal designation as a determinate of quality.” –Joseph Phelps

Insignia is explained perfectly from the Joseph Phelps website:

“Each vintage is comprised of the best grapes from Joseph Phelps Vineyards, first from both grower and estate fruit, and beginning with the 2004 vintage, from entirely estate-grown fruit sources. Insignia is a Cabernet Sauvignon-based wine crafted from six of the Joseph Phelps estate vineyards: Spring Valley Home Ranch Vineyard in St. Helena, Banca Dorada Vineyard on the Rutherford Bench, Las Rocas and Barboza Vineyards in the Stags Leap District, Yountville Vineyard in the Oak Knoll District and Suscol Vineyard in South Napa Valley.”

Forty years after the inaugural vintage, Insignia is recognized as one of the world’s great wines. The 2002 vintage was awarded “Wine of the Year” by Wine Spectator magazine in 2005 and in November 2013, Robert Parker of The Wine Advocate awarded three perfect 100 point scores to the 1991, 1997 and 2002 vintages of Insignia in his Historical Tasting of Joseph Phelps Vineyards Insignia (1974-2012) report.

Each experience I’ve had with Insignia has been memorable. It’s a wine to be shared with people who really know what great wine is and who will appreciate the nuisances that they taste. I’m constantly replenishing my stock of Insignia; it’s one of my go to wines for fine dining and pairing events. At a price point of $240 per bottle, it’s not a wine you’d drink nightly with dinner, unless of course you have the means to do so, and if you do, please invite me over. When someone’s devoted their life to understanding the world of wine, like Phelps and Schug, then I see it as an adventure to seek out the best bottles they’ve produced, to learn about their history and then pour myself a glass.

Cheers to you Mr. Phelps. You produced one hell of wine!