Mondavi – the name speaks volumes within the wine world and has been considered, by some, a legacy of great quality as well as an organization known for their ingenious marketing. When you hear the name you may think Robert or Opus One. Sadly, the name may also conjure up a less flattering image, with their decision over the years to expand into the ‘lower cost markets’ with their less quality table wines, selling to big box stores and supermarkets. The Mondavi name in Napa Valley goes back over seventy-years, not to mention that the old winery, prior to the Robert Mondavi’s father purchasing it, already had over 100 years of winemaking heritage in the region. Robert also had a younger brother, Peter, who is actually my focus for this piece.

The legacy began in 1943, Robert Mondavi asked his father, Cesare Mondavi, to buy a failing winery that was clinging only to its name; Charles Krug. The price was $75,000. The Krug Winery was founded in 1861 by the namesake, an immigrant from Prussia; now part of Germany, Poland, and Russia. Krug was a pioneer in Northern California winemaking and he shared his knowledge with the then, young and burgeoning industry.

A few years before Krug died, he was in deep financial trouble. The list of people and lenders he owed money to was vast. If not for his reputation as a reputable winemaker, I doubt he would have managed to attain the funds he so needed, most of which came in the way of ‘direct + personal’ loans from individual directors at the Bank of St. Helena. When Krug died in 1892, the estate was bankrupt.

The winery was purchased by one of Krug’s close friends, James Moffitt Sr., who used the house and its gardens as a country home. The vineyards and winery part of the estate were leased to Krug’s remaining heirs; 3 daughters, 1 son and a cousin. James Moffitt held the winery through Prohibition; which at the time was not an easy task for anyone in the making and selling of alcohol between 1920 and 1933.

Cesare Mondavi, an immigrant from Italy, along with his two sons Robert and Peter, restarted a winery that was to become one of the most influential in California. Today, Charles Krug is run by Peter Mondavi’s sons, Peter and Robert. They produce nearly one million cases a year, ranging from Cabernet Sauvignon and Zinfandel to Chardonnay and Pinot Noir. But that’s not the story.

The real story of the Charles Krug Winery, under the guidance of the Mondavi family, takes place in the mid-60’s and involves a battle of power, ego and Italian temperament. I know this all too well, as I too grew up in an Italian family that battled one another over a family business. From my own personal experience, anger, resentment, and litigation runs deep. After Cesare Mondavi died in 1959 his wife Rosa took over as President with sons Robert as General Manager and Peter as Vice President. Per their father’s wishes, the Mondavi brothers would work together to grow the winery. Tensions grew and in 1965 Peter accused Robert of not having paid back the winery for a mink coat he purchased on his company expense account for his wife. Robert, pissed off by Peter’s allegations hurled a few punches and the eventual conclusion was Robert being ousted from the Charles Krug Winery, lawsuits ensued and in 1966 he founded his own namesake, the Robert Mondavi Winery, right down the road about 5 miles.

The legacy of the family and their battles would go on for years and years and is written about extensively in a book by Julia Flynn Siler, titled The House of Mondavi: The Rise and Fall of an American Wine Dynasty. It’s a book I strongly suggest you read, as it’s one of the greatest and saddest stories in California wine history. Siler did extensive interviews with the family and board members, scoured through countless court transcripts and personally conducted one of the last interviews that Robert Mondavi gave. He was ninety-one. At the time of this writing, Peter Mondavi is still alive at the wonderful age of 101. He still shows up for work every day. He is still constantly being interviewed, signs checks and compiles the family’s wine history. His two sons Peter and Marc run the day to day. 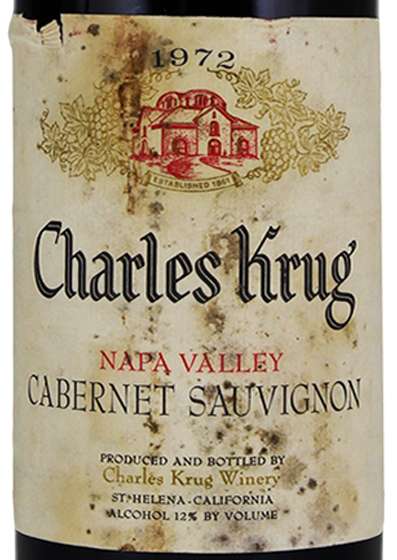 Peter Mondavi a graduate from Stanford in 1933 and then UC Berkeley was one of if not the first person to use cold fermentation for white wines. Before this process, white wine looked like ice tea and had a sharp taste to it. He was drafted in 1942 and served until 1946. His brother Robert really got the winery and vineyards in shape. When Peter returned he put his engineering, chemistry and enology skills to work. Robert moved into sales and marketing.

The reason I’m focusing on Peter Mondavi is that the bottle I’m reviewing this month is an old one. It was produced a few years after Robert was gone and the deep Napa Valley passion for wine, that we know today, was just starting to take giant leaps. The vintage of the Charles Krug wine I’m drinking is 1972.

Drinking an old wine is not for everyone. It’s not like what you see in see in the movies, “I’ll have the 1947 Cheval Blanc.” Or “Bring me a bottle of your oldest vintage.” In those cases, the actor drinks it and hails it as a vibrant, hearty wine. Uh, NO! Drinking an antique wine needs some preparation as well as a discerning palate, one that can enjoy grapes which at one time held fruit and floral features that are now replaced by essence of tobacco, vegetable with a fusty odor of wood.

When I drink an old wine I need to be in the mood for it. Yes, I’ve had some 35+ year wines that drank wonderfully. The fruit was there, hints of dark, dark floral tones were present and the finish was smooth like an aged cognac. But more often than not, the majority of old wines that I’ve had, tasted as if they were sitting on the plank of the Black Pearl as Captain Jack Sparrow and I are toasted to the strong winds, as we sailed toward uncharted lands. Don’t get me wrong. There are some great wines that have held up, especially from Bordeaux, but these wines and vintages are few and far between.

Drinking a California wine past 25 years is a gamble. The tannin levels are not that of Bordeaux. [Tannins: The grapes skin and seeds, the astringent taste of a wine, protects from oxygen.] Also, oak barreling brings tannins into a wine, as the wood brings out and enhances different flavors into the juice. Cheaper wines add tannin powder or wood chips. Acidity is also a key factor. A grape varietal with a high acid content will age better, as it takes longer to break down. The same goes for alcohol content. A wine with high alcohol will stick around longer. Sugar levels also play a role in aging a wine. This is why most aged wines that can actually last beyond 100 years, are sweeter wines, like a port or a Sauterne.

The 1974 Charles Krug Cabernet Sauvignon was rated an 81 by Wine Spectator in 1994. Then it was only twenty years old. This is what they said about it: Noticeable bottle variation in two tastings. One sample was very tired and metallic; the second showed better, but with an earthy edge to the supple currant and plum flavors. Dry and simple on the finish. Best to drink up soon.

I’m about to open a 1972 in 2015 – a forty-three-year-old California wine. Some things must be done before this wine is tasted. First, invite friends over to drink with you; Sadie and Joe are on their way – check! Second, stand the bottle up two to three days before opening so the sediment has a chance to settle – check! Third, purchase a bunch of cheese, crackers, chocolate, fruit, etc. to enjoy with the wine – check!

The bottle opened with an aroma of green olive and raisin. I decanted the wine in a tight necked 1000 ml Pyrex flask and let it rest for about 20 minutes. From 10 – 20 the aroma changed from an olive to a deep forest floor. The raisin moved to a brandy scent and once poured the first bite brought a musty, earth tone and a hint of long-lost tannin fell into a finish of artichoke and tobacco.

The twenty minute decant may have been a tad too long for this vintage. 5 – 10 minutes would probably suffice. I told my wife and friends, “Do not linger on this wine. Drink up. Gulp it down.  Feel what this wine would have been 30 years ago.” Yes, it was a bottle past its prime, but this is the art of wine tasting, the art of drinking nostalgia. While oxygen is biting at the heels of the wine’s spirit; you don’t have time to reminisce, you drink what’s in your glass, using your wine knowledge to decipher the quality of what was and we did.