Things don’t exactly go as planned when the 1% drinks like the 99%. For the last two weeks (or there about) I did something I really didn’t need to do or necessarily want to do, but when I thought about it, I decided it would be an interesting experiment or at the very least, entertaining. Besides, I’m always up for a good challenge. There were no holidays or celebrations, no birthdays or dinners on the horizon. No big occasions that would compel me to throw open the wine cellar doors and look for a beauty just sleeping on the rack begging to be dusted off and uncorked. So, with nowhere to go for the next few weeks, I began.

The day after Valentine’s Day I would begin my experiment, of drinking only boxed wine. I decided I would conduct this mission over the course of two weeks. I mean really, how bad could it be? Before I got to the ‘unboxing’ I first needed to do some research on how the average wine drinker makes their decisions about what to drink and why. What varietal do they enjoy most? How do they decide where to purchase their wines? What price point do they drink at most often? What other factors influence their choices?

Question: What are the top five varietals average Americans say are their favorite?

Answer: Chardonnay comes in as the favorite. Next up it’s a tie between White Zinfandel and Pinot Grigio. My nemesis Merlot takes the next spot. Finally, blessing be to Cabernet Sauvignon as it rides its little ass up in the last spot.

Come one! Are you kidding me? There is no way I can go with their number one choice and do ‘white wine’ for two weeks. Not to mention, there’s no freaking way I’m drinking Merlot, not at any price. Seriously. Who did they survey here, The Real Housewives of New York? Clearly, I’m going to have to mix it up.

Question: Where do average Americans buy their wine?

Answer: Wine and Liquor stores were number one. Grocery stores were number two. Big box stores came in at number three. It seems like this might be a bit more challenging than I imagined. I’ve never purchased wine from any of the options on their list. Well, maybe Costco but that was a long time ago, and besides, I don’t have a membership with them anymore, so that’s out. I’ve seen the selection grocery stores have, and some are better than others, but for this challenge, I’ll go with the most popular choice and get myself to a BevMo and see what I can find.

Question: What is the price point average American wine drinkers, will spend on wine?

Answer: If we’re counting, 51% comes in at spending under $20. A mere 14% will spend over $20 and those who will spend over $100 for a bottle of wine, drops considerably to an underwhelming 1%. Hmm. Well, now I feel like a total snob. I don’t have anything in my cellar or in my wine storage under $100. That doesn’t mean wine has to be expensive to taste good. Quite the contrary. Most nights, I drink medium priced wines with dinner, that come in between $25 – $45. In the cases where I’m going to sit on a bottle for 5 – 10 years, it had better be produced by a great winery which has a reputation for quality. 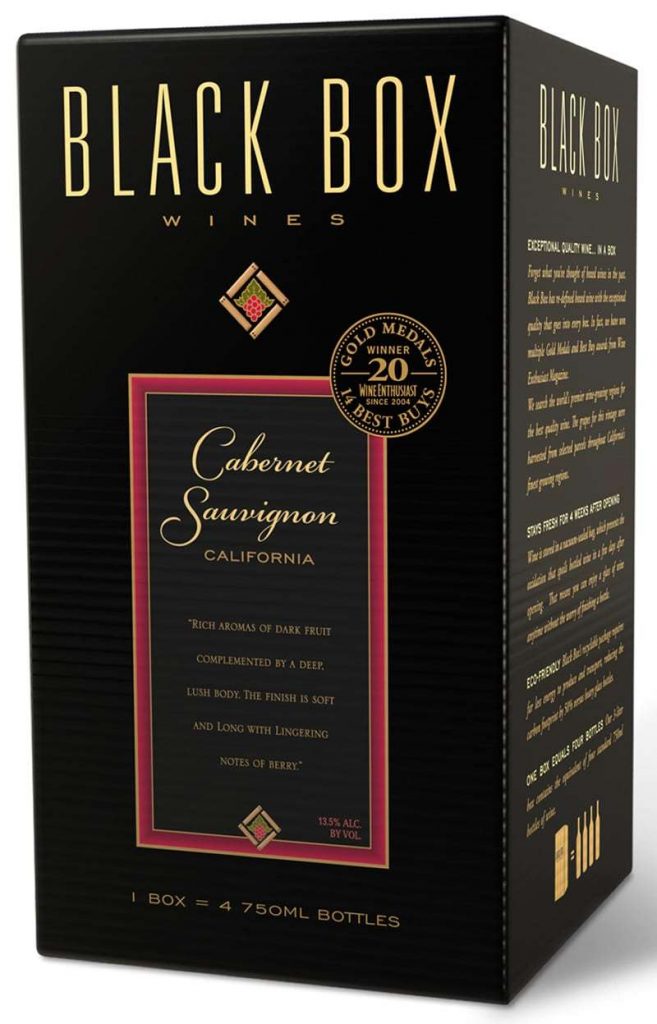 Question: What is the key deciding factor when buying wine?

Answer: Price is the number one answer. I could have guessed that. Number two is the brand. Brand? Really? I would never call the wines I drink a ‘brand’. It sounds like bad marketing. Nike is a brand. Gatorade is a brand. Kleenex is a brand. Kosta Browne is a winery. I was happy to see that varietal, at least came in at number three. The problem, however, was that fruity red wine was preferred and I knew I couldn’t stomach that sticky sweetness for two weeks. Again, some variety was going to be required.

I did my research on the “Brands” of boxed wines. I won’t bore you with those facts. I read reviews from various bloggers and even respected wine magazines. I had my answers, and my decision had been made. I decided to buy my boxed wines based on who had the prettiest packaging. Yep. And so it began.

I chose three boxed wines; Bota Box Red Revolution (3 Liters), Black Box Cabernet Sauvignon (3 Liters), and Franzia Cabernet (5 Liters). All three boxes came in under $20. Two of them contain 4 bottles of wine, and the Franzia came in a bit over 6 bottles. That’s right, I was drinking wine under $5 a bottle. It was high school all over again. The results? They’re in.

Black Box Cabernet Sauvignon (3 Liters): There was something very appealing about having 4 bottles of wine at the ready, just sitting in my fridge, waiting for the pull of a little plastic spout. Hmmm? Why can’t Screaming Eagle do that? I’d pay $3000 for a box of some of the best wine on the planet, and it stays fresh for weeks! After a few hours, the wine had chilled, and I poured myself a glass, swirled and smelled. It had the notes of stinky socks and overripened fruit. This is going to be a long 2-weeks I thought. The front brought a tightness to my cheeks, and I think I found plum, cherry fruit roll-up, and maybe Apple (the computer company not the fruit). The finish was perfumey and musky at the same time. It reminded me of the time I bumped in Kate Moss at a club in Hollywood. I was standing at the bar, waiting and waiting for a drink, when Ms. Moss sauntered up next to me from the dance floor. Naturally, the bartender went right to her and ignored me. She looked at me and gestured to him, “I think he’s next.” He ignored her words and asked her what she wanted. She looked at me, “What are you drinking?” “Tequila,” I said. “Two tequilas.” Being very inebriated, and full of moxie I told her she smelled like a vineyard after it rained. She picked up her shot of tequila and toasted me, shot it and grab her damp hair, rubbed it in my face and in the cutest British accent said, “You’re freaky!” then walked away, leaving me with a $35 bar tab. Yeah, the smell of her hair is what the Black Box finished like.

Bota Box Red Revolution (3 Liters): A cute plain cardboard box with environmentally friendly writing all over it. They even boast about being a ‘best buy’ from Wine Enthusiast. I wonder if Robert B. Parker ever tried this one? The nose was very fruity. More strawberry than rasp or black but let me be clear, I’m not talking about a fresh strawberry. No. More like the one that fell off the counter without you noticing, then rolled under the table. The one you finally realized was there when a few days later you saw a brigade of ants attacking it, leaving their unvarying trail across your kitchen floor. Yeah. That strawberry. The front (aka the first sip) didn’t really show me anything, but at once made my cheeks pucker, which is never a good sign. A moment later, the slightest sign of life began. Kool-Aid, with a dash of Boone’s Farm Strawberry Hill Tickled Pink. Finishing this box would be a slow descent into madness. The finish held onto that ant-covered strawberry from start to finish and as my palate mellowed a warm alcohol numb saturated my throat.

Franzia Cabernet (5 Liters): Okay. So, the only thing cabernet about this wine was the writing on the box. I’m not even sure the wine was naturally red. You could taste the additives that had been added in. From the oak syrup to the acid, it was nothing more than a poor attempt at faux tannins. The nose wasn’t terrible. A hint of oak that was more like grandma’s hope chest than wine barrel, but not awful. A bit of tobacco and a dash of something wanting to be a cabernet but, never quite making it. The front was more of the same, acid, a strange fruit and cheek-puckering. The finish was just that. Done. Nothing really there. All I knew was that I had the equivalent of 6 bottles of this stuff to drink and I didn’t know how long I could keep it down or keep ‘this’ up. So I did what one would do in college, shut up and just drink it.

Fast forward. To be completely honest I didn’t last the full two weeks. I came in just under 9 days, and then I clawed open the wine cellar door and dove in blindly grabbing whatever rose out of the darkness to meet me. Ahhhh. Thank you Rivers-Marie 2009, Pinot Noir! You rescued me.

Here’s my honest take. I do see a use for boxed wine. College kids on a budget, a family picnic where no one cares what wine is being served, a block party or a cheap way to keep your wine buzz going while you relax with the family. I’m not sure I can see myself ever having a need to buy box wine, for any reason, but they do have their place. Just not in my fridge.

The Black Box was my favorite. Bota Box came in second and Franzia a distant third. I ended up finishing Black and Bota. The Franzia I gave to my 83-year-old mother for her and her friends to enjoy on her sundeck. The most interesting thing about this study on ‘box wine’ is that you never really know how much wine you actually consumed, in any given time frame, unless of course, you’re counting your glasses, and who does that? With a bottle of wine, you can quickly determine how much you’ve drunk by how much is left in the bottle. Box wine on the other hand just seems to keep pouring out like a broken water pipe. Did I drink a bottle during dinner or was that two? The alcohol content is pretty low on these wines, so I felt full more than buzzed.

I’m not going to give these wines a final rating, as I don’t rate a wine that I consider below 90 points, but if you find yourself heading out to a tailgate party, grab a box and party on, and on, and on.